Have finished 3 battalions of 1770s Austrians, which will act as fictional Astrovians in my mid-18th century Pils-Holstein campaign.
The figures were created by John Ray, who sold me a whole load of them several years ago. I hadn't done anything with them until recently when I decided on a speed-painting experiment.

They were awarded their flags (courtesy of Mark Allen) last weekend as we journeyed to Partizan.
Regiments shown are: Kaizer, Deuchmeister, and Salm-Salm. 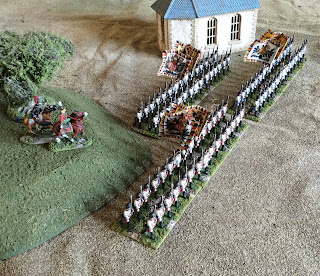 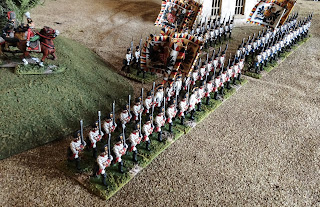 Figure painting by me, flags by Mark Allen.

Also not shown before, the Prussian IR5 battalion... 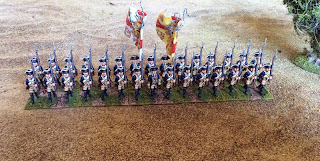 Figures, from my own range, painted by Dave Jarvis, flags by Mark, based by yours truly.

I came back from Partizan as inspired as I had been by Salute. Met lots of people, enjoyed the chatter and the games, and the new venue. Well done to the organising team.

Partizan Bring n Buy ?
Apparently there isn't one...
Which is a shame, because I was going to sell a few bits n bobs... 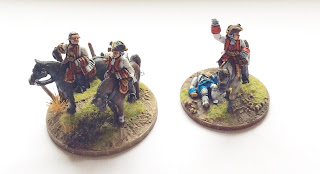 Above: Austrian Command vignettes: £ 30 for the pair.
Update: Bought by Henry.

Above: Austrian artillery - 2 guns and crews, plus a couple of spare figures... £30 the lot.
Update: Bought by Chris G. 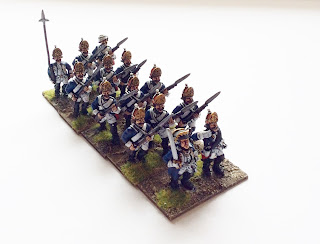 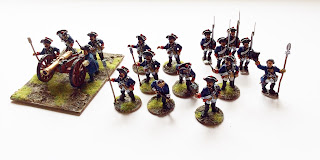 Above: Jagers. These are dressed in black coats (an imaginary uni), but could easily have green applied to make into historical unit. 8 figures. Just £10.
Update: Jagger's bought by Alan (Tradgardmastere).


So, if you are going to Partizan, and want to buy these, let me know in the comments below, and we'll arrange exchange.

On the subject of Partizan, I'm very much looking forward to it, and to the new venue. Looks like some good games are on, and I have a couple of traders in the cross-wires at the moment!!