Have stumbled across a load of my old wargames photos from way back in the "heady days" of running demo games in the 1990s and 2000s.
So, decided to add to the archives pages (see links on right) over the coming weeks.
Have just added the Italian Wars page. 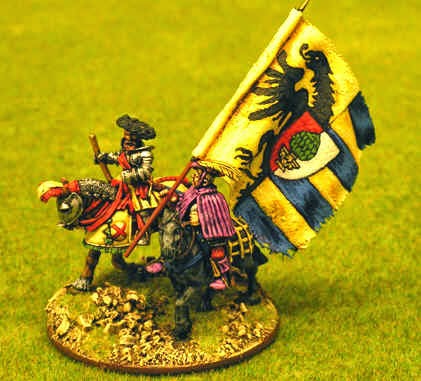 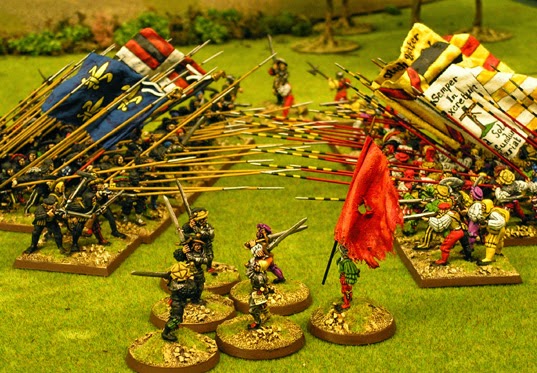 Thanks to those who commented previously requesting to see some of the action.
I personally don't like reading blow by blow wargame accounts, so won't bore you with that here... just a few pictures and maps.
Suffice to say that the action was a tense affair, and an experiment. We ran this game online, with the 2 commanders having been emailed their briefings and maps, sending me their respective deployments earlier in the week.
I played out the game and sent regular sitreps via the AMG forum, and the commanders then texted me updates to their orders (as well as hurled banter at each other on the forum, egged on by quite an assembled throng of witty onlookers).
I posted photos and maps as often as I could, every 2 turns or so.
Certainly, the fog of war was recreated very effectively, and the good nature of the participants tested!
Thanks to Graham Cummings and Chris Sinclair for being so gracious with their time, and playing the parts magnificently.
In the end a close game, with the cunning French plan almost succeeding. Unfortunately for them, they were unable to carry the day, and the Pils Holstein defence held out.

Anyway, here are just a few maps and pictures from the game. 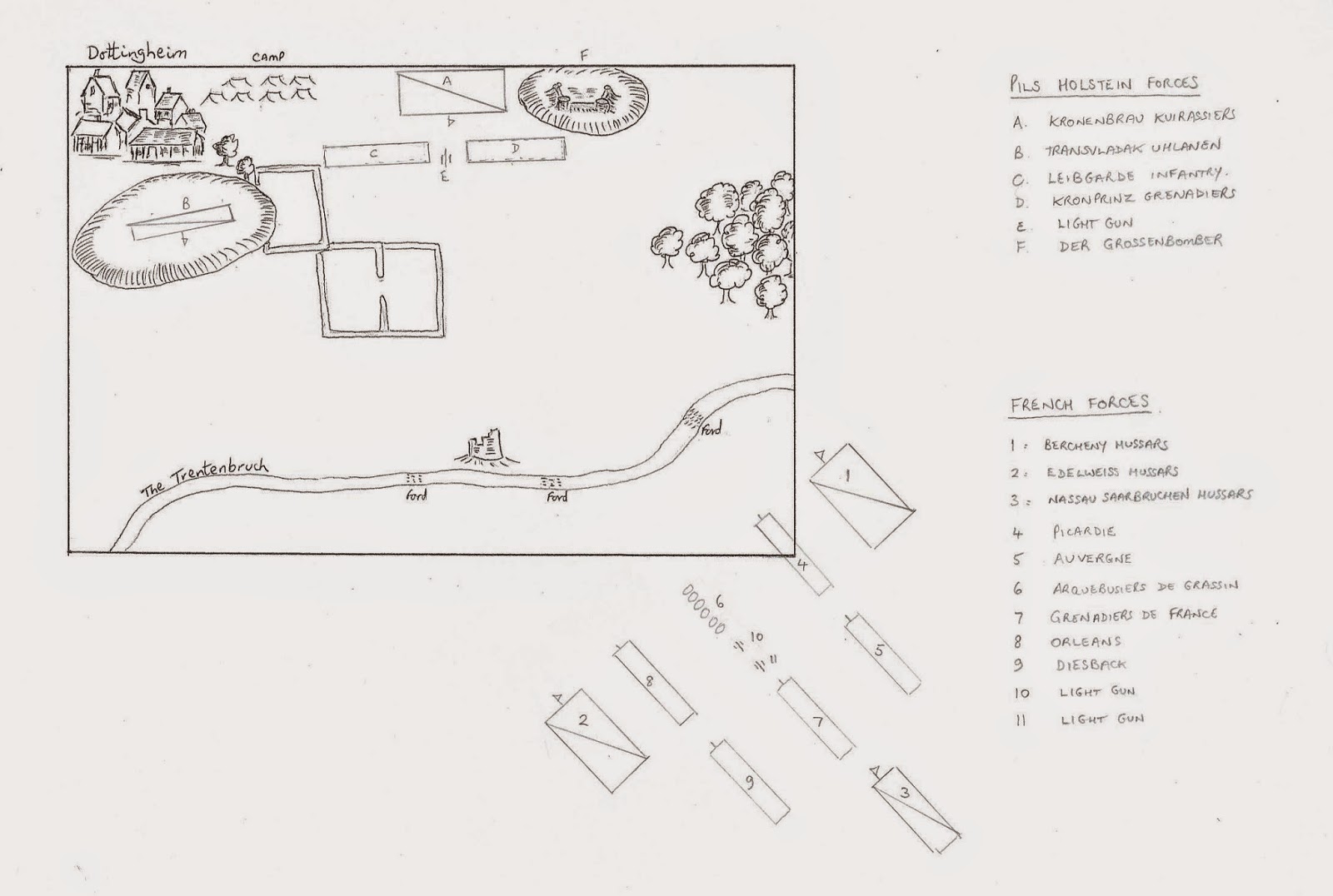 Above: the initial deployments
Below: The situation at turn 4. Note the arrival of reinforcements. 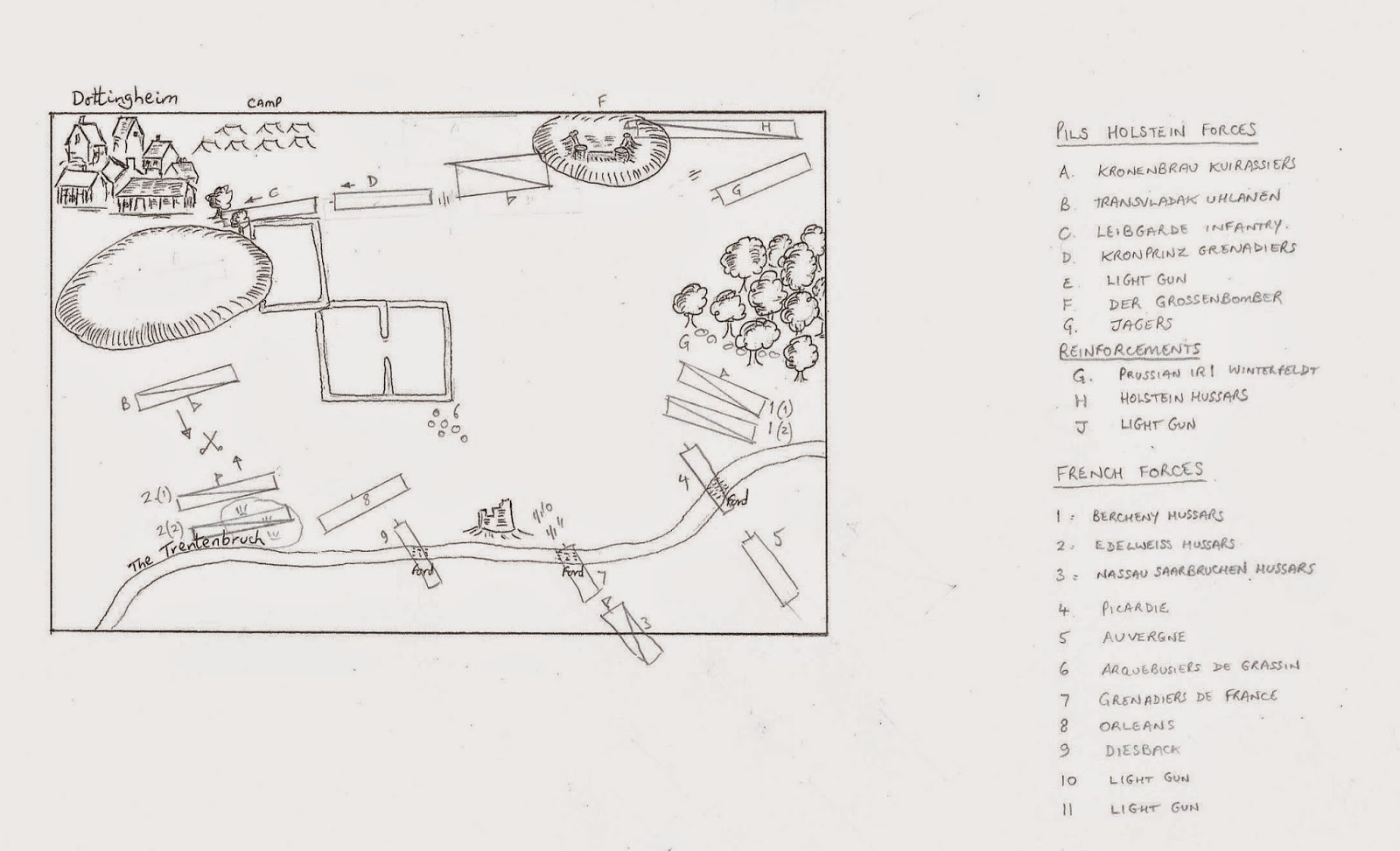 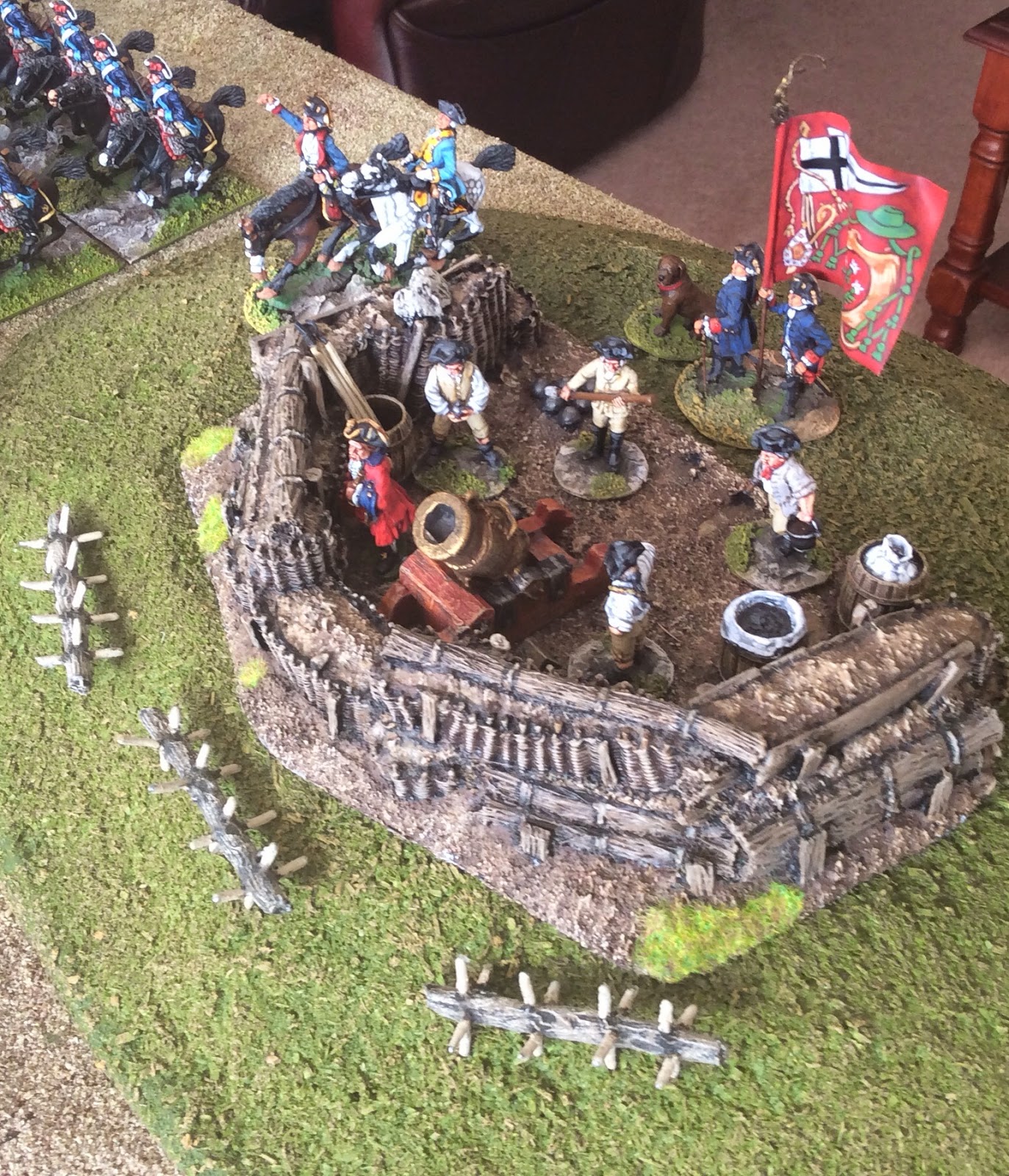 Above: "Der Grossenbomber". Baron von Bluttrott, commander of Pils Holstein artillery, observes the scene and chooses targets!
Below: Grassins in the wheatfields 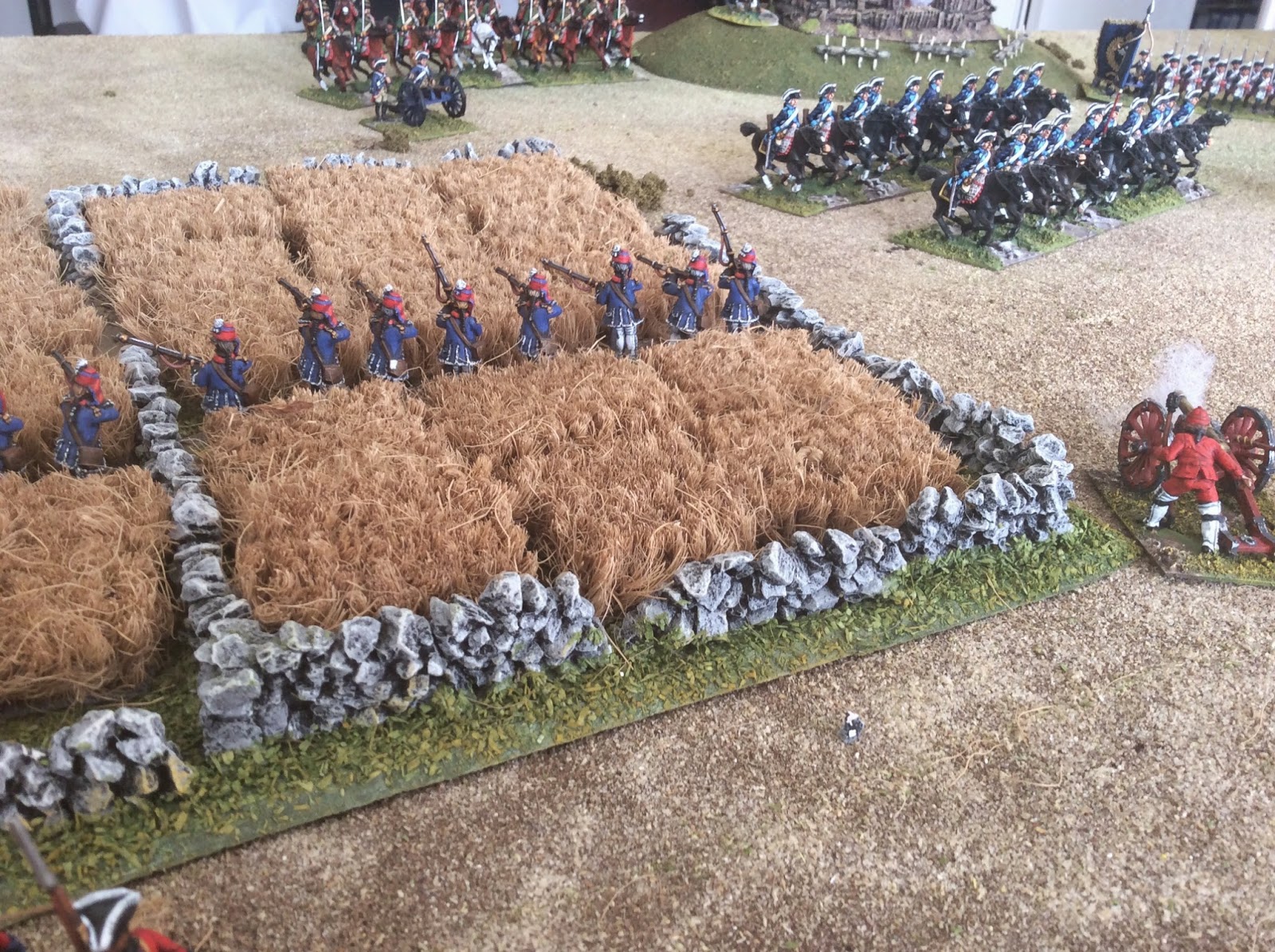 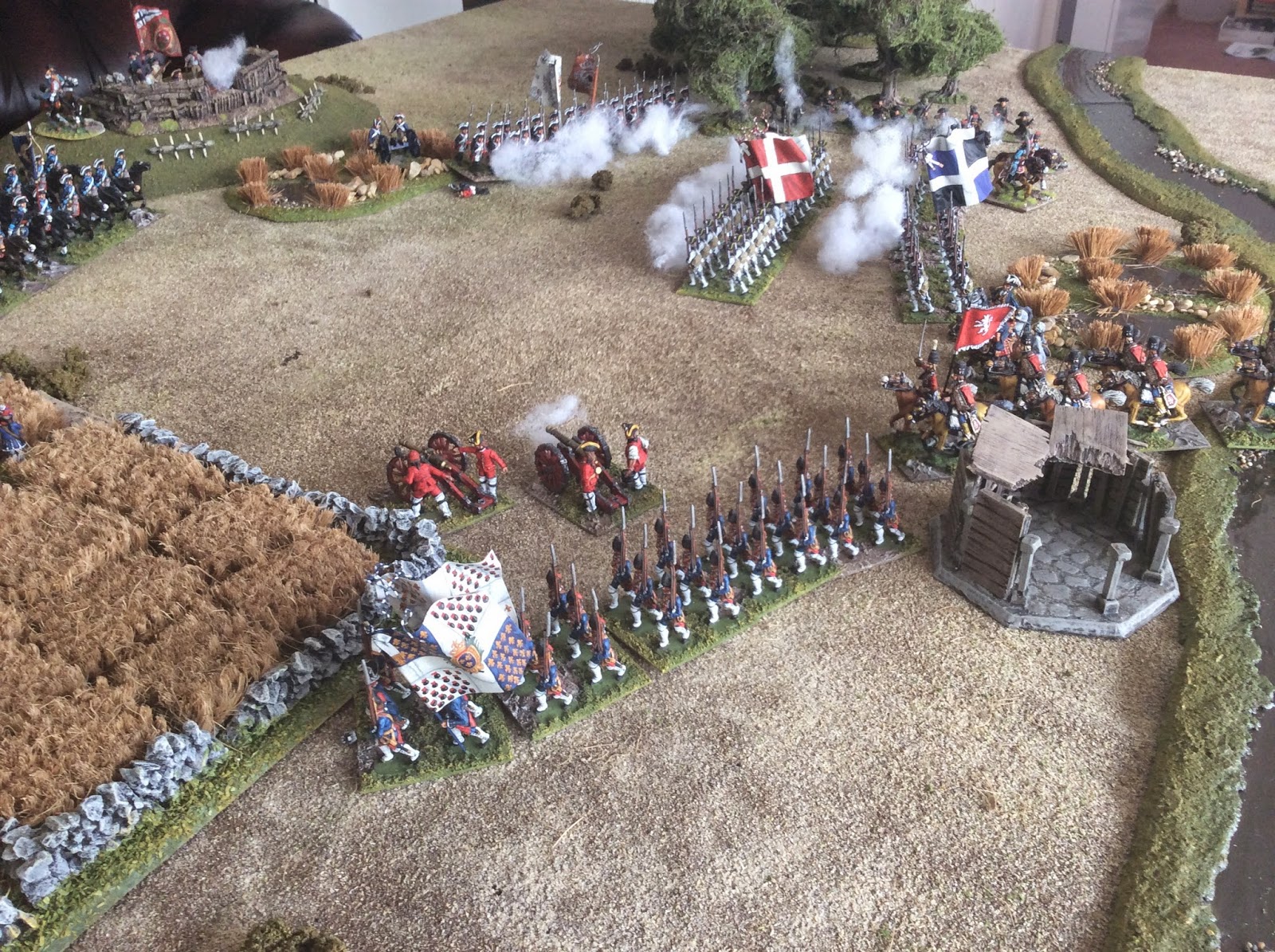 Above and below: the firefights develop, and meanwhile Der Grossenbomber has landed a shell between regiments Picardie and Auvergne. 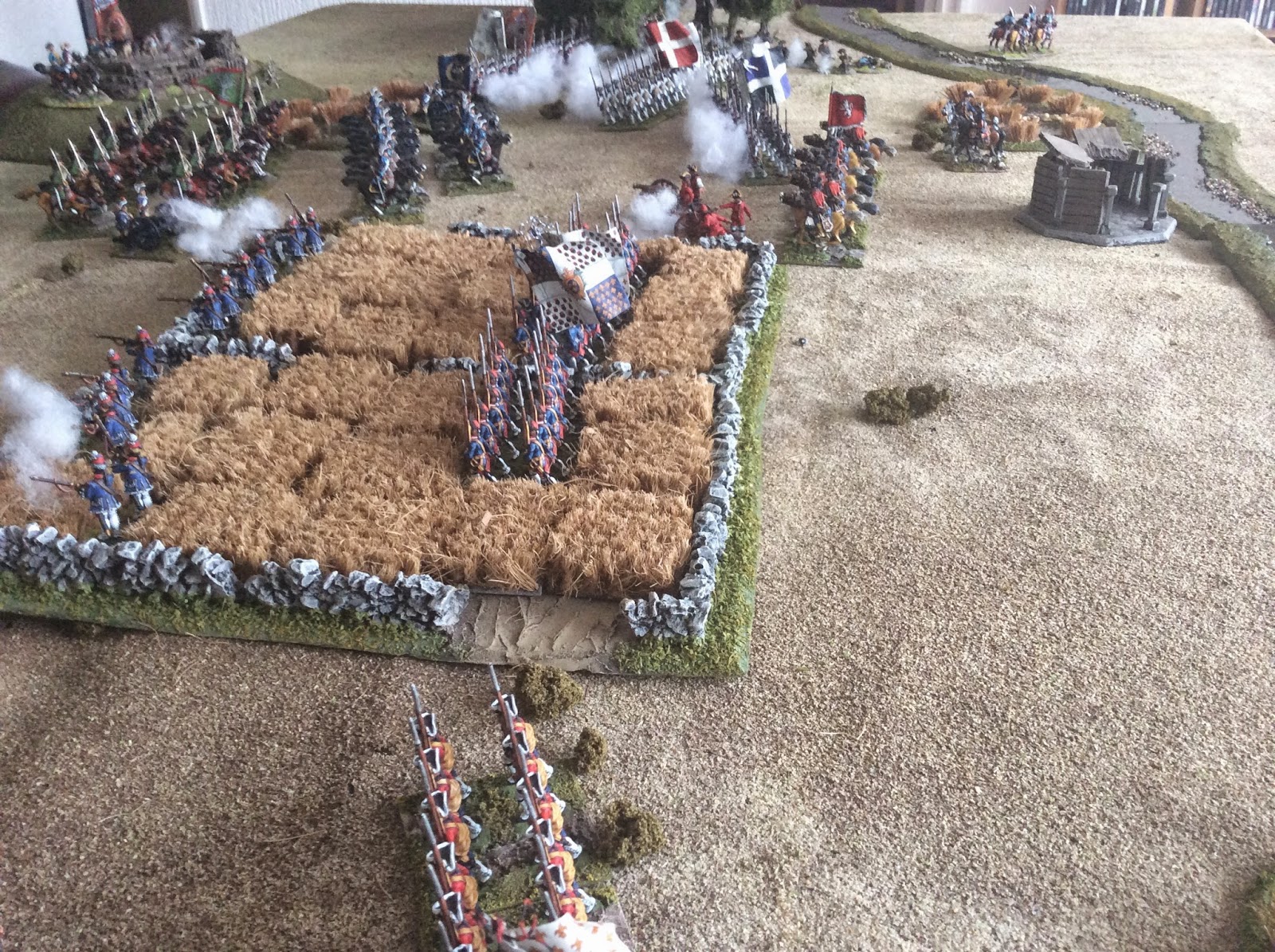 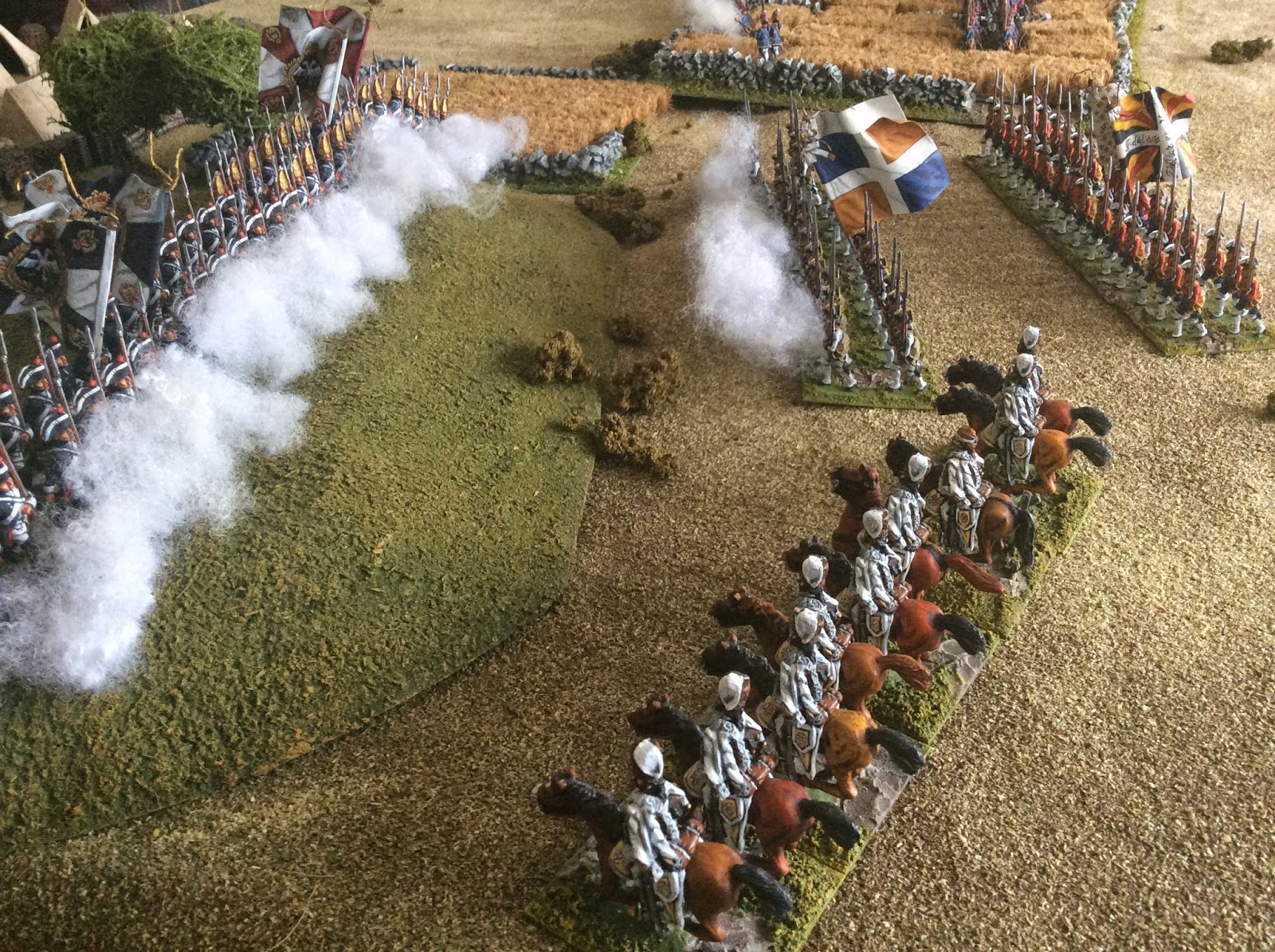 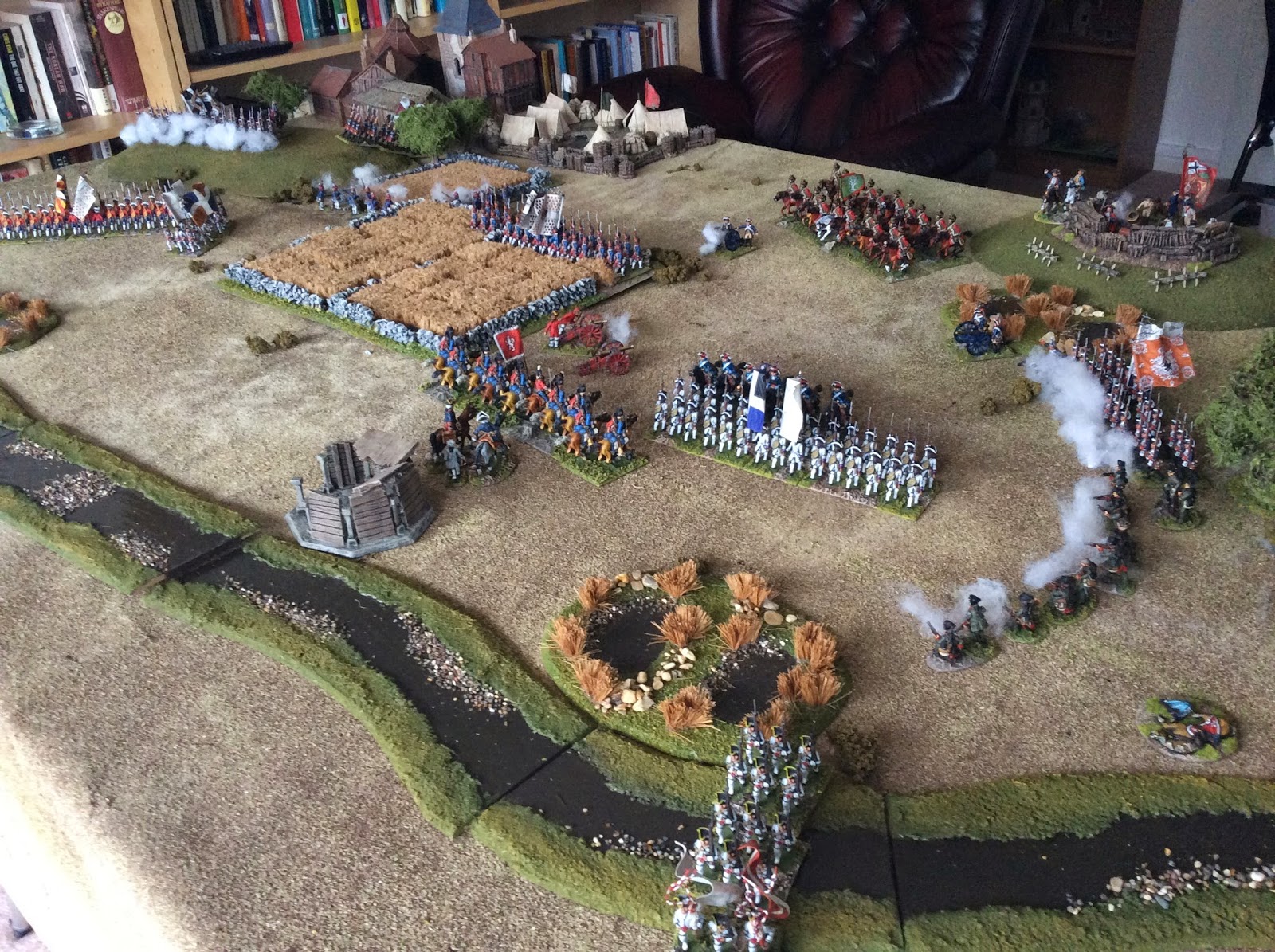 It's hotting up in Dottingheim and environs.
The sketch map shows the tabletop layout. 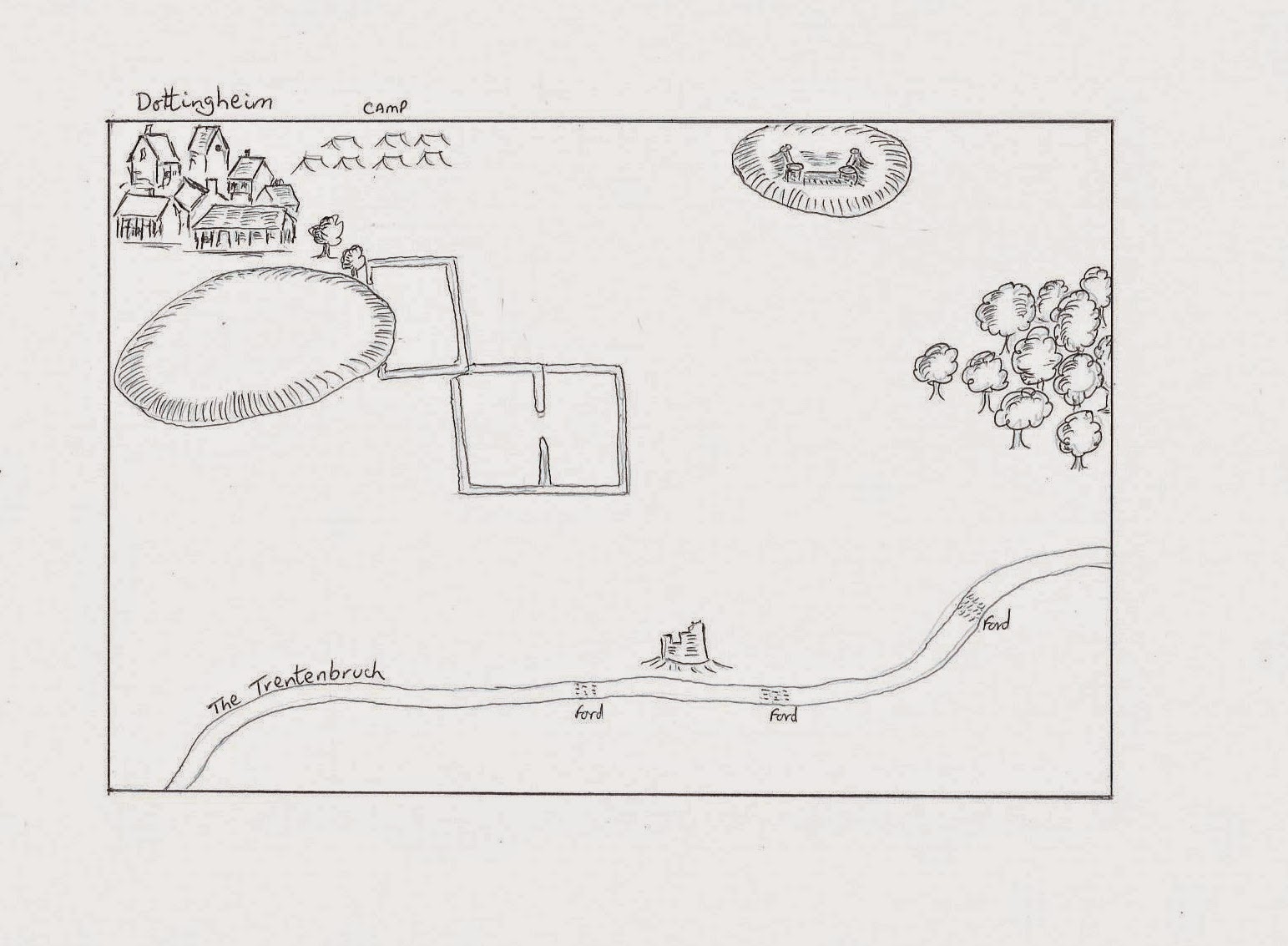 It is September, and in Pils Holstein the harvest is about to begin, although the recent heavy rains have delayed this somewhat.
Rumours of a build-up of French forces for one of their probing attacks into the borderlands of Pils Holstein are not uncommon. But of late, these have been rather more consistent, and an attack in the area of Dottingheim seems imminent.

With Markgraf Heinrich having been replaced in local command now making his way to Breitlinghoven to attend to urgent affairs on his estates, his successor, von Kreist, assesses the position.
Rumours of a build-up of French forces just across the border mean that he will reinforce this position, guarding the crossing points and fords over the Trentenbruch. The watercourse has been swollen by the late summer rains, giving von Kreist time to assemble a blocking force to assist the militia gun-team who permanently man the gun position ("Der Grossenbomber") atop the hill.
As the golden wheat in the fields around Dottingheim sways in the breeze, Kreist realises the air is warm, and that means the ground will soon dry out... and a French attack will be more likely.

Briefings have been sent to the respective commanders, and we're ready for the showdown this coming Saturday.
Posted by Phil at 17:15 6 comments:

Just a quick post as I've finished basing the latest French infantry battalion - Auvergne - who are now marching to take up their post ready for the attack on Dottingheim. 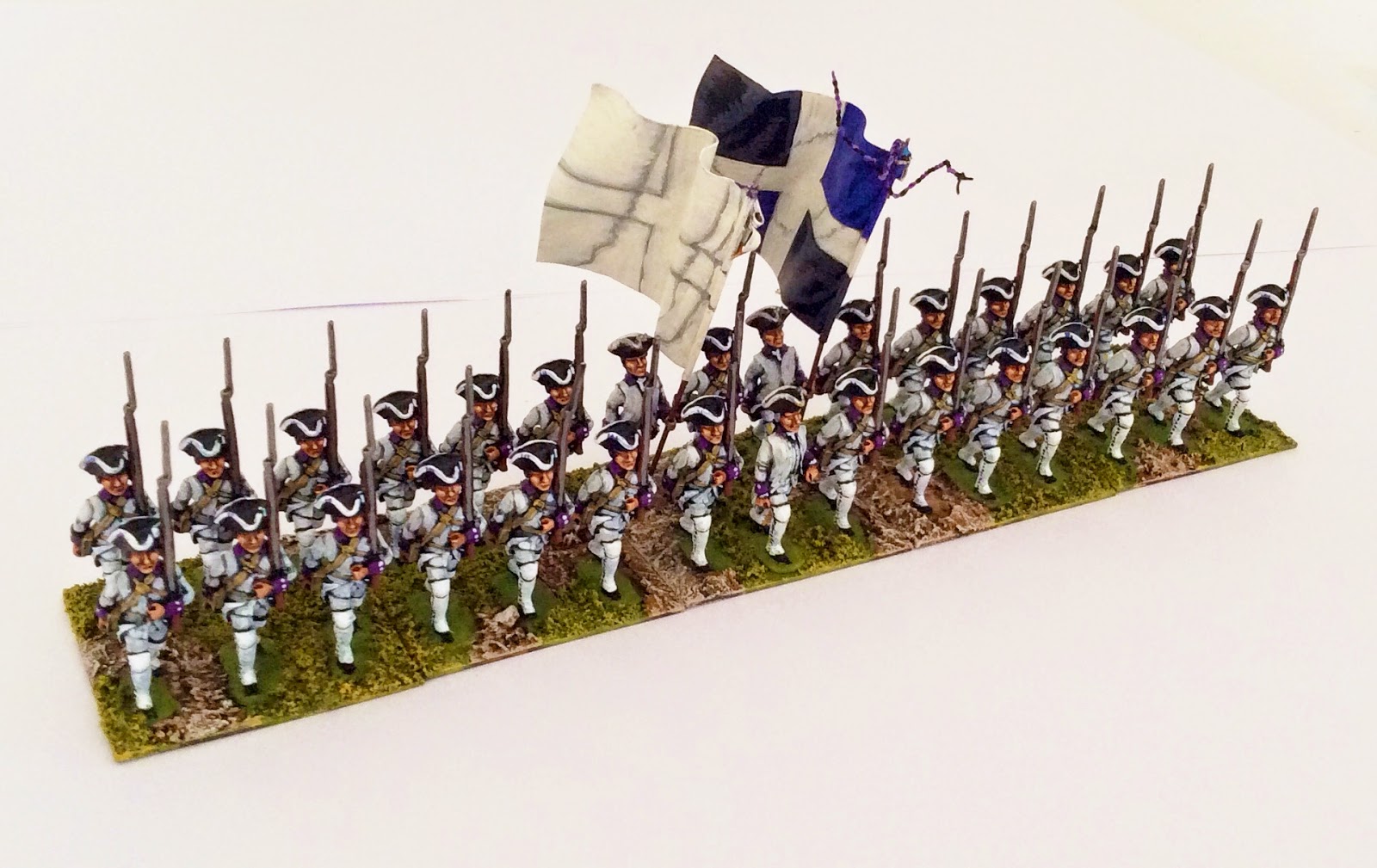 Figures painted by James Brewerton, flags by Mark Allen.
A number of people have been in touch to ask, and I thought I should clarify: The figures are my own range, and not for sale. I decided, when embarking on the project that I wanted something unique to my collection, and so elected to have the figures specially commissioned.

Whilst I'm answering queries: someone (Austin) asked in the comments o the previous blog post whether I would be doing a full report on the Dottingheim game here. The answer is... no, not really. I will do the unfolding updates on the AMG forum. However, a short report and a few pictures may appear here, after the event.
Hope that clarifies.