Every second Christmas, I re-read The Hobbit.
Have done so for years.
It gives me a warm, comforting feeling, a sense that all's well with the world.

Add to that, the arrival of Dragon Rampant, and a holiday "clear out" of some of the deepest recesses of the unpainted figures cupboard, and the inevitable happened.

I played roleplaying (AD&D) way back in the 70s, had some figures that haven't seen the light of day since then and also had a few bits n bobs I'd picked up in the 80s. 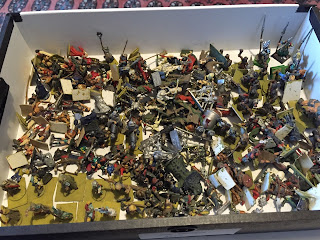 Amongst the boxes were old Minifigs, Valley of the Four Winds, Ral Partha, Chronicle, Citadel (including the Fantasy Tribes range) and a whole host of other stuff. 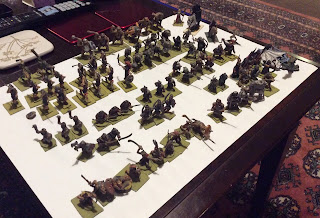 Above: a gaggle of goblinoids.

I've always wanted to do something Tolkeinesque, with minimal magic, and a very dark age style to it.

Now, whether I'll pursue this any further, who knows (those Vendel figures are rather tempting though), but over the past couple of days I thought I would just see what I could muster for a 24-point Dwarf force and a 24-point Orcish/ Gobliny force. 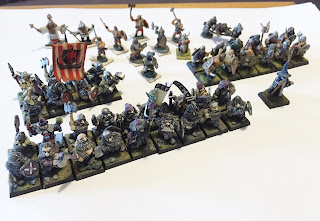 Above: Durin's folk... various manufacturers, plus a "Wise Old Man Of The Woods" from Minifigs "Valley of The Four Winds" range.

Decided that the Dwarves are ok (I'll reorganise them into 12-man units as per the rules). Some of the bad guys, on the other hand, needed a little repaint. I decided to go with the green Orcs look, although I think if I were to rehash this totally, I would do differently. 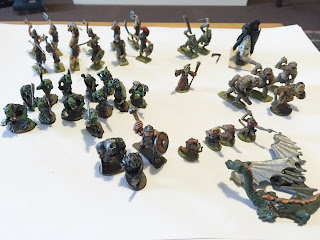 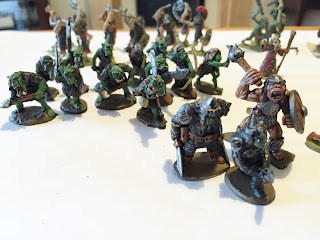 Anyway, at least the brushes have been active, between the odd dram, and the leftover turkey.

Back to normal next week, and normal service will be resumed, I'm sure.

HNY - and credit where credit's due...

Happy New Year!
Don't worry, I'm not going to do an over-blown review of 2016/ looking forward to 2017 style post.
Just a quick couple of points.

But first...
Credit where credit's due!

I was wandering around WHSmith, Leamington, in the twilight, numberless days between Christmas and New Year, and stumbled upon the latest magazine offerings (or at least, WSS and MinWarg).

And, what ho!
Lo and behold! There's my figures on front page of WSS, and inside too on p.27 (my buildings), and on p.30 my French infantry ...
But wait.
What's that?!
It's in an article about a Marlburian game... Grimsby Club... Ramilles...?
Surely not! My figures are mid-18th century, not early.
Could I be mistaken?
No!
I recognised the photos immediately, for it was the game Graham Cummings organised for AMG forum members to put on at Partizan a couple of years ago. A refight(mid-18th Century style) of Ligny.
And, yes, those were definitely my French figures, my buildings, and Graham's teddy bear fur terrain. But not a mention... of either of us.

The article credits The Grimsby Club, and these are part of the Ramilles article. I know for a fact that Paul Robinson of said club has some great stuff for the period which would have made perfect photos for the article. In fact, one such photo is there.
But...

Oh well, I suppose to the editor they're all just figures in tricornes after all... albeit they're 50 years apart.
Yet...
... oh how I laughed... in Richard Clarke's discussion column in the magazine the final two sentences read:
"Just so some corporation can boost their profit margin. Isn't it about time historical wargaming got real again?"

Annoyed about this?
You bet I was.
But not for the lack of a name check. No, I've had plenty of those in my hobby lifetime.
No... annoyed that seeing pictures of my figures made me buy the magazine, for posterity.
I wasted several quid on that pile of ....

But, the universe has a way of balancing things up, doesn't it...
In my inbox pops an email from Greg and Stokes, with the first of their new Wargamer's Notes Quarterly PDFs.
And in the editorial, doffing their caps to my old Classic Wargamer's Journal, I'm described, along with Don Featherstone, as a "hobby giant!"
I think that's being rather generous.
But thanks guys. I'm very flattered.

In 2016 I painted over 300+ figures. Whilst this is not back to the halcyon days of regularly knocking out 700 plus, it is a surprising total as I thought it was nowhere near that amount, until I counted up the other day.
On the gaming front, 2016 was still light, but I'm not too worried about that. 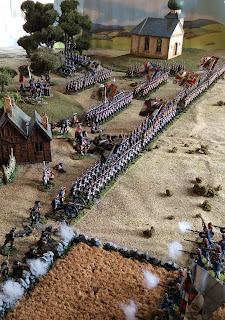 More Pils Holstein 18th century stuff... I'm doing a display game at a show later in the year, so I've got lots to produce. 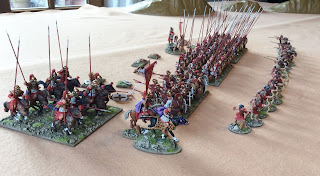 Macedonians... need to finish this army for War & Conquest. 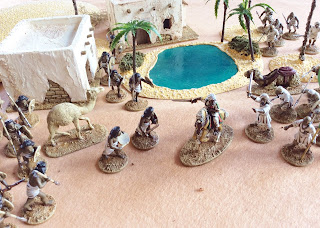 Colonials... will potter along with this, maybe have a couple more solo games and see where it goes.


And, finally, a fresh new project.
Again just a potter along/ tinker - not going too Rampant on it. But yes, it is Rampant. I like the rules (Lion, and yes, Dragon), so may see some activity here!

Here's to a prosperous 2017, and may you all enjoy your hobby in the year to come...