War of the Vaubarian Succession

Over the past year, I have been meeting with a fellow wargamer at our favourite haunt, our HQ, a small pub on the Fosse Way which is midway between our two homes.

Dubbing oursleves "The Fosseway Indie-Fencibles," the discussions have been about all things wargaming, and beyond.

Over the past few months we've decided to collaborate on a small project set around 1704 or thereabouts, using the Front Rank WSS range... just a few units, you understand.

We've called this The War of The Vaubarian Succession (WVS) as it's a fictional affair between the imaginary nations of The Electorate of Vaubaria (me) and Hautmont-Etrurie (Steve).

You can expect something different from the usual imagi-nations affairs, however. First off, we've settled on much smaller units (20 Infantry and 12 Cavalry) and having chosen Front Rank for the lead, it's not "old school" as such. We'll be using a set of rules I began using for the period around 1990, namely those of the late Peter Gilder, the Wargames Holiday Centre set for the period (slightly adapted).

Suffice to say, it's still at the very early stages, but a start has been made on the painting of figures.

Here are a couple of photos of the initial force of my Vaubarians... 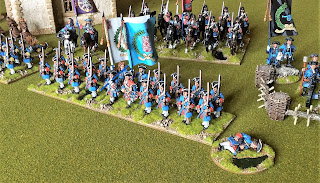 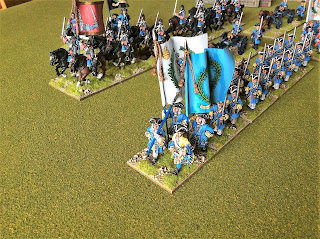 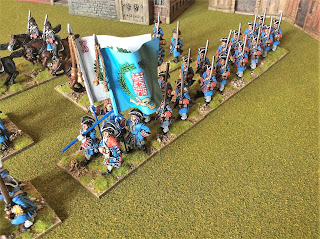 The sharp-eyed will notice I've done the artillery in both deployed and "limbered, on the march" configurations. I've also done a casualty marker for each unit. It's good to begin as you mean to go on, rather than playing catch-up at a later date.

This is a slow-burn, and I'm just enjoying the leisurely painting time. We've got a couple of games planned in the diary for the near future, so I'll add pictures of those as we go.