The little town of Muhldwein (pronounced 'Mulled-Vine') is all a buzz with rumour, gossip and speculation. 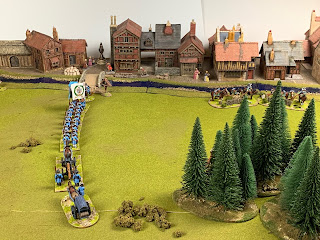 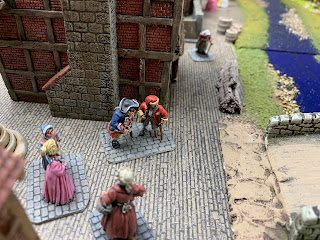 As shepherds watch their flocks in the hills around the windmill, troops of the Vaubarian army arrive in the town. 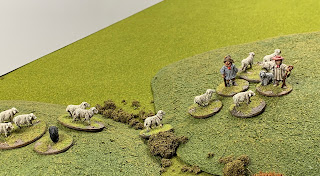 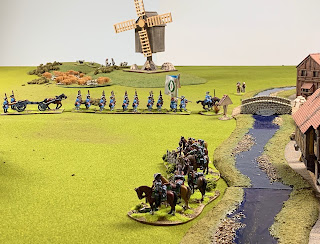 Word soon spreads that an Astrovian force is just half a day's march behind them. And then further news... as well as the essential supplies afforded by the town, that must not fall into Astrovian hands, it turns out that The Elector's Christmas Chest (containing gold coins that are dispersed to honourable citizens and loyal subjects throughout the land over the festive season) is also stored in the town. It must not be captured!
Further news has it that a relief force is on the way, hoping to arrive before the town falls to the Astrovians.

By early next morning, having worked through the night, the small garrison (Breitner regiment, Muller Light Dragoons, and a single gun) has begun collecting stores in the town square ready for evacuation, and has erected some rudimentary defence-works. 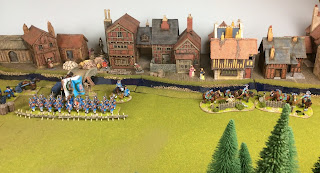 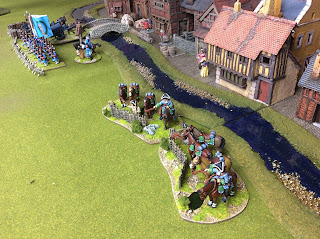 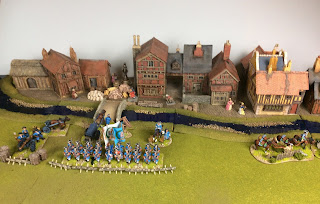 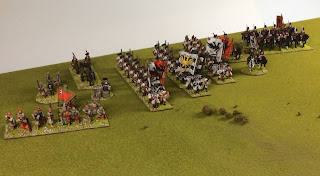 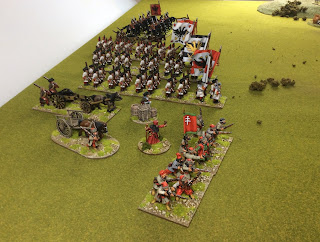 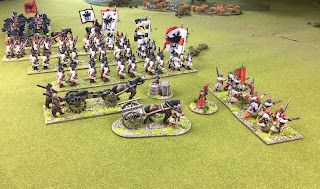 Battle is about to be joined...

With most visitors to the blog being hardened Horse & Musket fans, I was pleased that so many responded favourably, in the comments and via personal messages, to the previous post about the Macedonian Successors.
I've taken a few more photos and updated the Macedonian Successor page (see navigation links to the right...)
Enjoy! 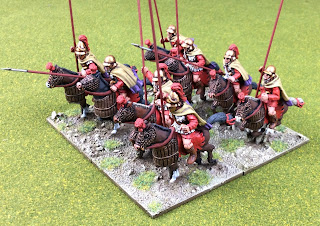 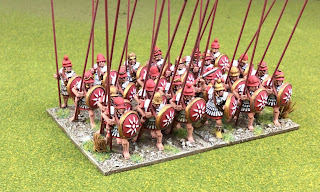 More on the Macedonian Successor page.

Tomorrow, news of a horse and musket battle... 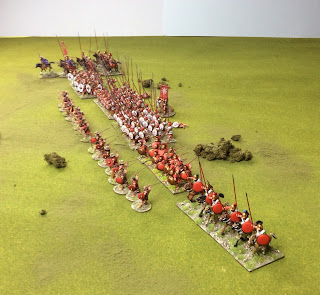 I referred in my previous post to the Bathelas Campaign being organised by Henry Hyde.
Henry is basing this on the sort of campaigns fought in the past by Tony Bath, using ancient armies ranging anything from 3000BC to 1500AD. It means participants can paint any figures from the broad ancients-medieval era, and it will get fitted in. In true old school style, all protagonists create a country name and so on, and the umpire will run the campaign. Henry has done a very fine job of creating a map and there are about 10 or so players building up forces.
I'm referring to this as Imagine-Ancients gaming.


My own army is that of the fictional state of Macadamia... a sort of Alexandrian Successor style force (don't worry, the pun about them all being 'nuts' has already been done!)

I've just completed this unit of Greek-ish (Thesalian style, but not quite) cavalry. 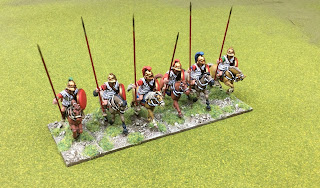 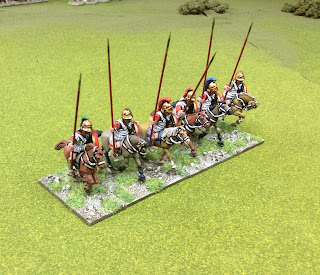 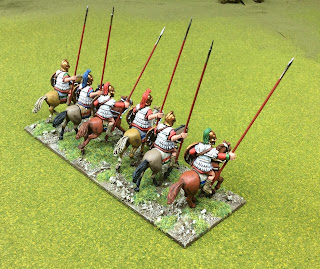 This adds to the force which had lain dormant for a couple of years, and brings it along nicely. 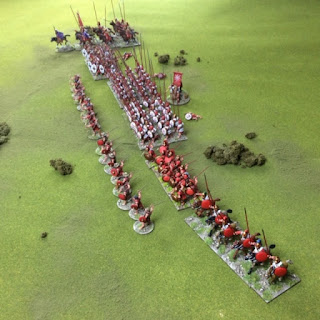 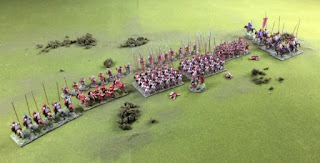 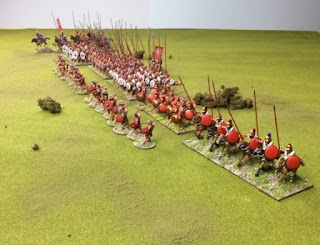 And the commander, Philipolytas The Great, plus Army Standard Bearer. 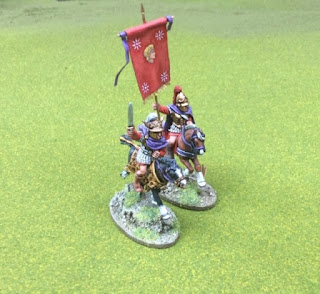 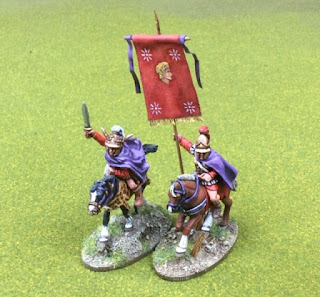 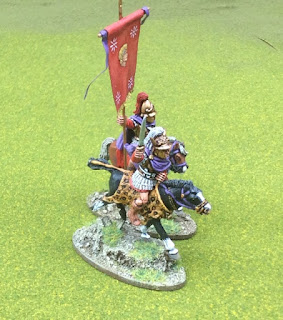 I need to add another phalangite (pike) unit (at least) and an elephant is also in the offing.
I'm likely to add some Thracians, plus some Cretan archers aswell at some point, and some Macedonian light cavalry (Prodromoi). and so it goes on...

It makes a change from horse and musket figures, and sometimes a change is as good as a rest!

As promised last time, here is a stocktake of my various hobby projects, and the likely prognosis for each.

Pils Holstein (PH)  - the mid 18th century. This project reached it's high water mark (so far) with the Neerfuncken demo game at Partizan a couple of years ago. It has somewhat stalled since as other periods have taken precedence. The figures for this project are my own range, and I have many infantry and cavalry castings ready to be painted, but there's one minor niggle with it... I haven't got any Prussian cuirassiers. I had hoped to have the guy who helped get the infantry castings ready also do some cavalry for me, but it wasn't to be. I'm exploring other options...  But at the moment, there's no rush. 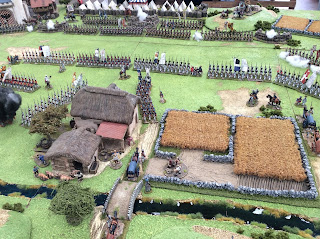 Wars of the Vaubarian Succession (WVS)
The 1704 campaign between the imaginary states of Vaubaria and Astrovia has featured heavily over the past couple of years, but progress has been fairly slow. Maybe it's too close to the PH collection, being tricorne-based. Nonetheless, it's enjoyable to do, but sometimes I need a refresh to get it back to the top of the project hierarchy. 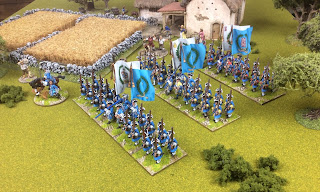 Colonials
I'm happy that, for now, this is at the simple game-able stage. Again, when the mood takes me, I have some castings ready to paint. 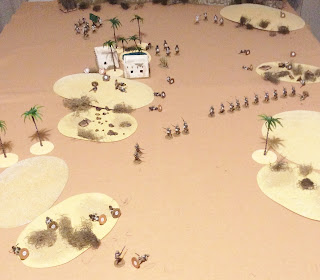 
Macedonian Successors
This has recently had an injection of energy as I prepare to field this army in Henry Hyde's upcoming Bathelas campaign. More on this army in my next post.

The Classic Collection
This is like the classic E-type, or Aston Martin, sitting in the garage, lovingly restored, but not getting a run out at all these days. It's based on the armies shown in "Charge!" and is documented in my other blog. I may, one day, add some cavalry and, for old time's sake, just play the odd game. But for now, I'm happy for it to remain on the shelves, just looking nice! 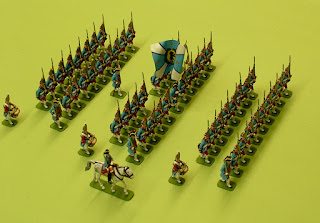 Thirty Years War (TYW)
This project was primarily a display which has had one outing, might get more, and is about 90% complete. When I feel the siren's call, I will return to it (there are a couple of units needing to be based, or flags added, so that will be a couple of quick 'wins' when the mood takes me). 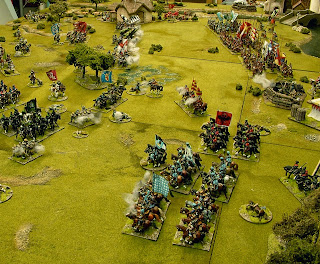 Little Britons - 42mm shiny figures.
This will only ever be a small affair. I've got a few units done, and when I fancy a break from more 'serious' painting, I will add some more.


What's next?
Over the years I have put on some display tables at shows, and often in periods chosen less for the gaming possibilities, more for the fact that they look pretty! So, I've done Italian Wars, Thirty Year's War, Poles v Cossacks, for example.
I'm considering shifting my attention to a similar style of project. I've even chosen the period, and started putting together some ideas. But it's a big commitment to take on, and I want to make sure I can take it on before I embark on it seriously.
So, for now, I'm going to get the Macedonian Successors finished, tickle the WVS along in the background, and have the occasional excursion into 42mm shiny toy soldiery as 'something completely different'. That should keep me going in 2020. But do look out for a possible leap into a display project that I will commit a couple of years worth of time and energy into. It may happen...

Maybe it was Stuart Asquith's departure (a good and fitting send off by the wargaming community which has been covered elsewhere online), or reading about Rod Stewart's model railway layout in the latest issue of Railway Modelling magazine, or watching back to back episodes, en bloc, of Mortimer and Whitehouse Gone Fishing, or once more indulging in the boxed set of Detectorists. Whatever it was, it's all got me thinking...

Stuart Asquith used to use the phrase "seeing how the other chap goes about the hobby" when describing what he got from visiting fellow gamers and discussing their approach, their projects, their gaming.
I'm fascinated by how people approach their hobbies... whether that's wargaming, model railways, fishing, or metal detecting, or any other sort of middle aged blokiness (because, let's face it, that's the category most of us reside in).

I've been having a look at how I've been going about the hobby, and have been taking stock.
This was also precipitated by a 'change' in personal and domestic circumstances (Women! can't live with 'em…). Actually, our splitting up has all been very adult and mutual, and the upshot is that I now have part of my home as a wargames room again!!

It's not yet fully fitted out, but there are troops on some of the shelves, and a table is set up (room for up to 8x6). 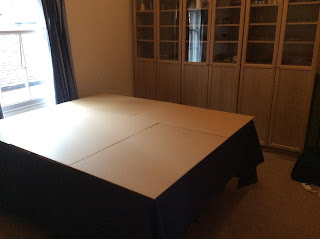 The likelihood is that I will get more games in 2020, even if solo, and certainly more chance to take photos of what I've been painting.
And I have been painting, a little.

Some might say I've been butterflying around, but I think that's allowed in a hobby, isn't it?!
Peter Gilder did it. And Don Featherstone before him.
And certainly Stuart Asquith did.
But, what they did do, when alighting on a particular flower (aka wargames project), is they would give it a thorough go.
Butterflies? Yes. But very thorough butterflies.

Recently, my interest in ancients has been rekindled. I needed a reason to finish off my Macedonian Successor army, and it came along in the form of a campaign opportunity courtesy of Henry Hyde and the guys on the Loose Association of Wargamers forum. Henry, as games-meister and head of state of Byzarbia, is aiming at a sort of 'anything 3000BC - 1500AD' Hyboria style affair (a la Tony Bath), set in the fictional Bathelas region.

I'm referring to it as Imagine-Ancients.
My own Macadamians (headed up by Philipolytas the Great) will take the field.

So that's one little project to be going along with for the coming year.
I have others... plenty of others. And I may publish a 'state of my projects' update, prognosis, and stocktake over the holidays.

Meantime, I wish all readers a very Merry Christmas.