It was always my intention to create a 'Campaign Journal' for the Wars of the Vaubarian Succession (WVS) project.
So, I recently began collecting together all the materials for this 'tome' and putting them into a coherent record.

This is to be a combination of the back-story to the countries involved, and the regimental 'histories' for each unit, along with battle reports of the tabletop action.

It contains my maps, outline notes on the countries (Vaubaria, Astrovia, and the campaign area, Mundania).
Steve's country, Hautmont-Etrurie, may also appear, but at the moment this journal is really purely a bit of self-indulgence. 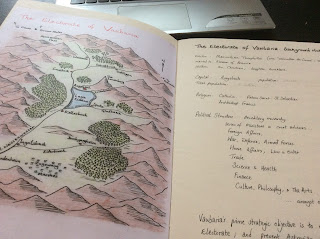 The journal also has a double page for each regiment...
One side is the background on the regiment: uniform sketch, a photo of the wargame unit, some notes on the regiment.
Opposite is space for the unit's service record. This will include a list of actions (games) involved in, broad footnote on the unit's performance and involvement, and casualty return for the action.

I have got behind on the regimental pages, so thought now would be a good time to start catching up...
Here's the page for The Vaubarian Leibgarde (IR1). 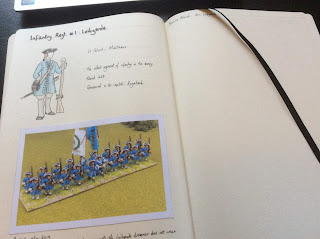 The rear portion of the Campaign Journal allows for battles to be recorded, with the usual sketch maps, orders of battle, and a short after action report, including pictures.
Just another part of the hobby madness!!

Back from the Brink

In my previous post I made reference to a possible new project that had crossed my mind...
And thanks to those who commented and threw up their hands in horror, implying that I'd lost all credibility as a paragon of wargames focus!

You'll be pleased to know that, when I reflected on the benefits of the new idea, and compared it with what I am already doing with the Wars of The Vaubarian Succession (WVS), the latter won hands down.

So, how did I draw myself back from a precipice that would have seen me descend into a chasm-like new project?

First, I considered why it was that Steve and I had chosen to do the WVS in the first place.
I revisited my notes: the rationale for choosing the period, the imagi-background, the figure range, the painting style, the rules,  the terrain style, the unit organisation and basing style, the planned steady build up of forces with teaser battles along the way. It all still makes sense. I just needed to reconnect with it, and pick up the brush again.

Second, I considered how much I had already got done for WVS. it dawned on me that whatever the new project, it would take me quite a time to get to where I am already with WVS. So there would be no net gain for quite some time, whereas by just knuckling down and continuing with WVS, I already have a platform to build on.

Then I got stuck in, started a fresh unit, and will have something to show for that in the next week, I hope.

Sometimes, a rest is as good as a change! The brief respite from painting WVS figures was just the break I needed..

Famously, a journalist interviewed Thomas Edison for an article under the title, "Edison's Folly", describing how the scientist had conducted 5000 experiments and failed every time to succeed in creating the light-bulb (I'm summarising and simplifying, but you get the idea).
Edison's response to the young journalist during the interview was along the following lines:
"Young man. You don't understand. I haven't failed 5000 times to invent the light bulb. I've just found 5000 ways that it won't work... which puts me 5000 ways closer to the one way it will work."

I wish I could be so positive about the number of 'failed wargaming projects' I've conducted over the years.

Of late, however, I've been pottering around with a number of 'non projects' on the grounds that occasionally it's just nice to paint a unit here or there, and see where it goes. Free-wheeling, if you like.
And it's allowed me to go into periods I otherwise wouldn't paint.
Here, therefore, are a couple of non-projects I've been tinkering with...

First up: some Normans.
These are Perry Crusader range figures I picked up from Dave Thomas at Partizan (while Jerry Miller, painter extraordinaire, egged me on! The rascal!) 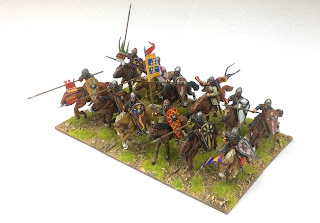 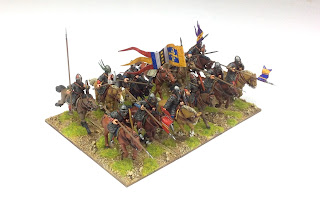 I enjoyed painting them. They're fairly basic once you've dry-brushed the chainmail over a black undercoat. Shield transfers and banners are by Little Big Man Studios.
They were for a 'very-much-on-the-back-burner' project set in the 11th century Mediterranean, with Normans and Byzantines fighting over sundry islands, not unlike Sicily, or perhaps further east. Nice to paint, but will it go further?

The next 'non-project' is The French Wars of Religion. 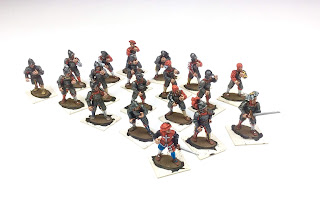 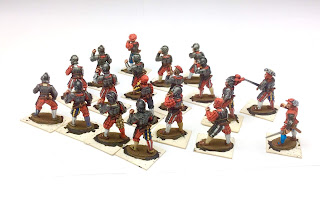 I've always had a liking for the period, and then TAG go and produce these lovely castings. These are Royal Swiss from the French Valois range. Just a few done so far, and whilst I enjoyed painting them, I may just dissolve the idea and leave it at that... We'll see.

Anyway, all of that is a way of showing that even I can put an Edison-like positive spin on 'failed' wargames projects.

Sometimes, it's nice to simply paint a unit, or a few figures, for no reason other than you like the figures. No harm done.

But, the experience has also taken me to a fresh little side-line that I may begin in earnest in September.
You see; for me, it's all about the figures.

In the end, I believe, you have to choose those figures you want to paint, and want to paint lots of, if you want a full-blown army (or two).
I'm in awe of those who can build huge collections, and particularly those who paint all the figures themselves, steadily turning out high quality, in quantity.

And, I like a challenge... with a heretical twist...

When I painted the Vaubarian dismounted Dragoons a few months back, I had also purchased some horses and horse-holders to produce vignettes to be placed behind the unit. But, at the time, once the actual fighting figures had been finished, I quickly moved on to another unit. So, the horse holders never got done... you know how it is.
Until now.
I've finally finished them:

As a reminder, these are The Muller Light Dragoons (aka Muller Lights).
Here's the whole unit: 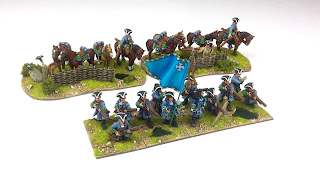 I've also been adding a few 'extras' to the Astrovian Karavani Croats. 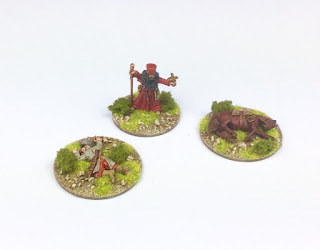 With the first public outing of this collection being only 2 months away (Cotswold Open Day at Northleach on 1st September), you'd think that I would be focussing absolutely on painting figures for that game wouldn't you?
Yeah, right!
In addition to all this Wars of the Vaubarian Succession (WVS) fictional stuff, I've been painting a few other bits n pieces by way of experiments for different periods. I'll post photos in next few days.