Thanks to all who commented last time. My ramblings seemed to have struck a chord with many... which is very gratifying indeed. So, on with the rationale behind our new project...

We settled down, one summer lunchtime, in our Top Secret favourite haunt (Fosseway Indie-Fencibles HQ, somewhere deep in the Cotswolds) over gammon and chips, to discuss figures.


Yes, gammon and chips… “No pineapple ring, thanks mate.”
Whoever first thought about putting a pineapple ring on top of a piece of gammon should be… well, let’s not get carried away…
Back to our storyline…


Right at the outset, we agreed that the painting of the figures is what derails most wargaming projects. Or rather, the not painting of figures.
How often has a wargamer, practically every wargamer, certainly including me, got started on a new project, a new collection, with vigour and intensity…


Then something happens.
Something gets in the way.


A new range of figures, a new shiny project, a new thought that creates the “wish I’d done it differently” moment that results in “now I need to change the figures/ change the basing/ change the painting style” moment of doubt that derails the whole thing.
So, we decided to have a lengthy planning phase.  This also allowed us to bring to fruition a few other little projects, or at least get to the point where energy and focus could be devoted to this one.


Choosing the figure range (and therefore the period to set the project in) was crucial. We wanted speed and ease of mail ordering (this would allow a ‘unit at a time’ approach, rather than having an over-facing lead mountain). We wanted single figures, separate riders/horses, and a complete range (so not a case of waiting for new releases to keep the project moving). The decision to go with the Front Rank WSS range was taken on this basis. Not only that, but they are figures we both admire, and have a penchant to paint. 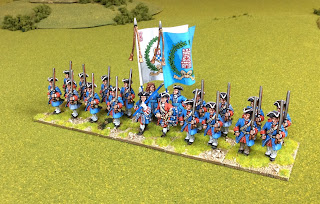 This was also aided by the desire to set the project firmly in the horse and musket period as we feel it is most suitable for the types of games we want to play… the ubiquitous balanced forces of Horse, Foot, and Guns being the order of the day.
Now, we won’t pretend that it was easy to reach this point. Although, the period and figures were mentioned right at the outset in our conversations, we subsequently visited practically every century, perused every range of figures, and explored every avenue of possibilities to decide on our project. At one point, “sending off for a few sample figures” became, “oh dear, I seem to have ordered a whole brigade!” … and not only that, a brigade for a period we subsequently discarded! Frequent emails, meetings at our adopted HQ, and get-togethers at wargaming shows, allowed us time to make the right decision. This also allowed time for a few other existing hobby ventures to be given full attention and brought to fruitful completion before launching properly into this project. 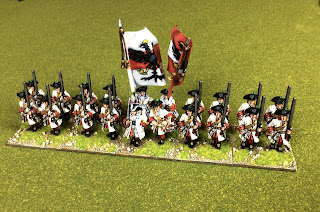 Next time, I'll talk about the countries we've settled upon and some of the other "essentials" of the new venture.