I have been meaning, for some time, to create a marching band for my 1704 project, The Wars of the Vaubarian Succession (WVS).

So what better way to spend the weekend, than to settle down whilst all the pomp and ceremony of HM The Queen's Platinum Jubilee celebrations were on telly, and indulge at the paint desk for a few hours. 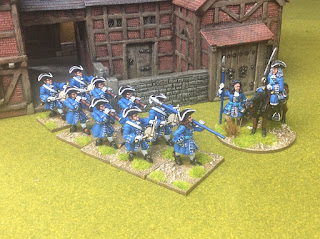 I thought the Trooping the Colour event on Saturday was particularly splendid this year.

Aly M has already posted some fine 'stills' from this parade on his blog. Pop over there if you need some inspiration on marching men in uniforms.

It still irks me that the drill manual decided to accommodate the SA80 when that weapon was introduced, whereas for decades we'd been using the SLR as the standard drill weapon. The latter is much more in keeping with the "General Salute, Present Arms" order, somehow, and the longer weapon makes for a much nicer appearance when shouldered and on the march, in my opinion. They should have kept it, purely for ceremonial. After all, the red tunics and bearskins are hardly battlefield kit are they. So why have the SA80 on the parade ground?

Answers on a postcard...