Following on from my previous posts, (and thank you all who commented), you will have gathered I have decided what to do as a "side-project" in 2016.

The post title might give some clue! ...a clue as to The Ansar (see what I'm doing here?!)

... and yet it's not just Sudan. In fact, it's not really Sudan at all. But it is Colonial... or at least my take on Colonial.

It's mainly North West Frontier, with a soupcon of Sudan, and a smattering of other adventures set in my own fictional colonial territories - more of which anon. Let's just call it "The Ghabazaar Imperative" for now (Ghabazaar being part of my fictional Colonial world - crikey, Phil, how much  useless baggage and stuff do you carry round in that fat head of yours?!) 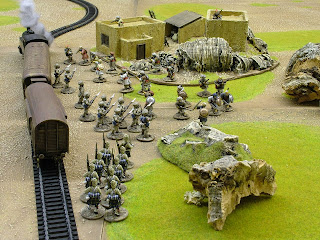 These are pictures of my previous attempt at Colonial wargaming, back in 2005 ish.
I never felt I quite pursued it enough, so this time I'm hoping to do better. Stiff upper lip and all that! 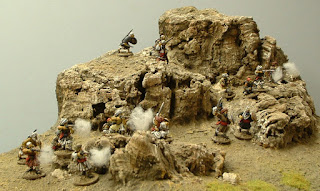 Anyway, here we go...
When setting forth on a new project, there's so much to consider, and even when it's just a passing fancy, like this "side-distraction", I do like to have some sort of plan, so that the butterflies are at least "flying in formation!"

So, in no particular order, here are my notes on how I approach new projects, and some of the thinking behind this new adventure...

1. Rationale and project objectives: What are the drivers for doing it? Is it primarily for Gaming? Collecting? Modelling/ Painting? Display Games? Solo gaming? Casual home gaming? Multiplayer games? Club games? A campaign?

For me, on this occasion, it will be mainly light-hearted solo games in a loose narrative campaign framework.

2. Scope and scale of project: This will be skirmish-sized games, initially with just a couple of dozen figures per side, but with scope to expand. Eventually, I also want to include a few steam contraptions, and other Imperial powers entering the fray - so Russian and French contingents may become involved, and possibly Prussians too.
And perhaps there's a role for the inclusion of a late 19th century Pils-Holstein (but I haven't fully decided that, yet).

4. Figures (availability and compatibility of ranges). In this case it will be Perry, Copplestone, Artizan. ... By the way, I'm open to suggestions from those "in the know" on all things Colonial!

5. Rules: Commercial, or homespun? Or a mix? In fact, I rarely (if ever) just play "off the shelf" and find I am always adapting/ interpreting rules.

In this case, I did consider Carlo Pagano's excellent Sudan rules, but wanted a more skirmishy feel to this project, so opted for The Sword And The Flame (TSATF).  Long ago, I played a few small games with TSATF, and felt they had the right style about them for colonial games, so I've ordered a new set (my previous copy having been sold off in the great clear out of 2011!). I've also got GASLIGHT on order, and it may be that I'll do a hybrid TSATF with Gaslight elements for the more outlandish "steamy" stuff... We'll see.

6. Basing: Largely determined by the rules and style/ scope of games, this is still an element many wargamers wrestle with, and many interpretations can exist even amongst those gamers using the same rules, at the same club! Basing styles, sizes, and conventions are always a "biggie" for any wargames project.
For this project, I'm basing singly... with multi-base options (so possibly using sabots or magnetic bases)

7. Reference material: As well as the usual sources for the Colonial period, this time, I will be following the inspiration of the likes of the old Major General website, and Bill Protz's Pettygree character adventures, along with many others. Further inspiration can be found on a number of Colonial bloggers sites... such as Maiwand Day (see links on right).

Interestingly, I've found that the centre of gravity for Colonial gaming seems to be very much in the USA, rather than in UK. This surprised me at first... but perhaps it's the existence of TSATF "over there" and other resources (such as The Virtual Armchair General, the annual Colonial Barracks convention, etc). Or perhaps it's something in the British psyche that is (possibly through some sort of guilt?) reluctant to engage with an Imperialistic past on the tabletop... But let's not over-analyse this.

8. Terrain,: I'm going to keep this as simple as possible, and may scratch-build a lot of it. Whilst it's tempting to aim at modular terrain boards, highly sculpted and beautifully presented, for this project (which is primarily about the fun gaming aspect), I'll be keeping it simple, functional, and practical for gaming purposes. And at first the tables will be small... I'm happy to be starting small and just seeing where it goes.

So, there you have it...
You might think I'm going totally Mahdi, or that it's all a tremendous red-herring, or that frankly I'm taking the pith.
But, it's my own barmy version of NW Frontier wargaming, all the way...
Well, NW Frontier ...with a little bit of Sudan, some Steam contraptions (but not too many!), a smattering of gunboats, and even an aerial element. Plus an imagiNations dimension aswell. Certainly the setting is fictitious (I'm sketching a map of the territory over Xmas). In short, this will owe more to Hollywood (or Olley-wood?) than reality. More to The Man Who Would Be King and The Four Feathers than the actual period history.
And, there's no doubt that the pages of The Ghabazaar Gazette will once again be overflowing with rumours of war, tales of derring-do, and whimsical despatches from the frontline!

But don't expect too much just yet. The 18 Century Austrians will continue to dominate the painting table for a little while ...