So, 2015 draws to a close:
overall mark for me on the wargaming front: Could do Better!
Mitigation: 2 house moves in 14 months, a very active and productive business period, and the growth of some other hobbies.

1. Astrovians for 18th Century Pils-Holstein project:
I've completed the Deuchmeister Regt (IR4). Once all the Astrovian units are done they'll have their bases finished, and hopefully Mark Allen will have completed all the flags, ready for ceremonial presentation!.

2. The Ghabazaar Imperative: Colonial Project
I've assembled, undercoated and blocked in a box of Perry plastic Ansar. These are two units for TSATF rules. 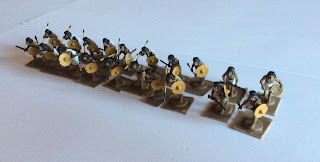 Above and below: a unit of Hadendowah Fuzzy Wuzzies.

Above and Below: a unit of Sudanese tribesmen.

Next step is to dip them, anti-shine varnish them, and then do some minor finishing touches and base.

3. Thirty Years War
This Swedish Yellow Regt was painted by David Jarvis for me a few years ago. The figures are all Brian Rigelsford conversions. This year I based them, and am now working on the flags.
The awful photos (don't know what's wrong with me today!) do not do David's painting justice. 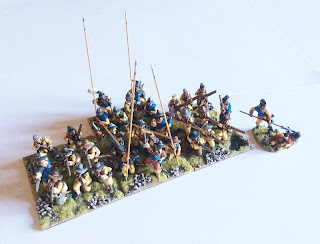 Parting Thoughts.
Amongst the year's highlights, I've got back some painting and hobby focus with the development of my new Colonial project, and the Pils-Holstein 18 Century project is moving along too.
Gaming-wise, it's been a poor year, but the highlight was the AMG forum game, organised by Graham Cummings, at Partizan.

And finally...
If any of you saw the excellent recent TV series The Detectorists (in fact there are two series, both now out on DVD), you will have enjoyed, I'm sure, the depiction of Lance (played by Toby Jones) and Andy (played by MeKenzie Crook) and their thoughts on what it is to be a male with hobbies. In fact, substitute "wargaming" for "Metal Detecting" and the script sums it up pretty well.
Men have hobbies, and women roll their eyes at them. Men need an escape.

As Harry Pearson observes in his marvellous book, Achtung Schweinehund ...
" 'There is no greater sport than the sport of escape', Major Pat Reid noted enthusiastically in the pamphlet that came with the Escape from Colditz board game. Every once in a while you need to go over the wall. And when Arthur and Tony needed to I had abetted them. And they had done the same for me...
... I thought about Arthur on his trudge into work, swept across London Bridge in the grey tide on a dreary winter's morning, his mind filled with the glossy, brightly coloured deeds of the little men. Every man needs a place to go, Montaigne had said, and, for better or worse, this was mine."

I hope in 2015, sharing my hobby via this blog has abetted you as well as it has me in making momentary sorties into our imaginary world.

In the meantime, I wish all readers a Happy New Year.