The table is set.
Tomorrow morning I'll be having a game with the Pils Holstein 18th century collection.
This is The Action at Kreuzung Bauernhof. It's based very closely on the Action scenario in Charles Grant's, "The War Game".

Here's a sketch map of the layout. 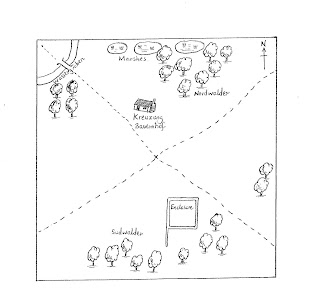 Those who are familiar with the original will immediately notice some changes I have made.
First, is the inclusion of a small stream in the northwest corner, with a bridge over it. This is purely because I didn't have enough plain flat terrain boards available. In any case, this part of the table is only peripheral and will play no real part in the game.
The next change to note is that I have replaced one of the enclosures in the original game with a small farmhouse. In the game presented by Charles Grant in his book, the players make very little use of this northernmost enclosure, and so I decided to make the change simply to make the battle a little less symmetrical.

I have also made some adjustments to the orders of battle of the two sides.
In the original game, it is apparent that the players began to split the units in half to perform more flexible functions. In fact, both players split their cavalry regiments in two, and I have decided to field two half-regiments at the outset, one heavy and one light for each side.
In the original, each side had two infantry battalions. I have opted for three, again to provide more tactical flexibility, and of course because my battalions are somewhat smaller, at 30 figures, rather than the 48s fielded by Charles Grant.
And finally, instead of including a Field Gun on one side and a Howitzer on the other, I have opted to have each side's artillery as simply one small Light Gun. This seems more in keeping with the troops I'm using, which represent the advanced force for their two armies, both of which would be intent on moving at speed, unencumbered by larger field pieces.

French forces will approach from the western edge of the table, Pils-Holstein from the east.

I am very much looking forward to the opportunity to use my homegrown rules, "A Grim Panoply", which haven't been opened for about two and a half years. 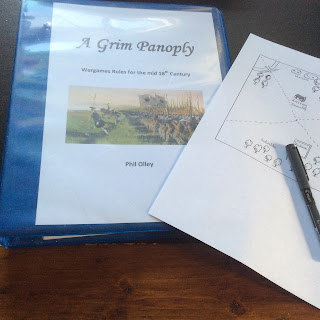 First dice are at 1000 tomorrow.
Full sitreps and despatches from the front will reach this warcabinet blog over the weekend.

Tomorrow evening is the fourth of our Virtual Wargames Club meetings, and I'm very much looking forward to hearing what the members have been up to this week. We've got one pictorial battle report already in and a painting tutorial being provided by one of the members too, in addition to several pictures for the show n tell.
Well done to everyone for contributing.