Visit to the Casters

Since some of you are itching for piccies of figures for the new project (yes, I know, I’m the same), here is one of my cavalry units that I painted recently. Previously I had this unit for my Classic collection using Holger Eriksson figures, and like many of my other former units they just had to be recreated for the new project: 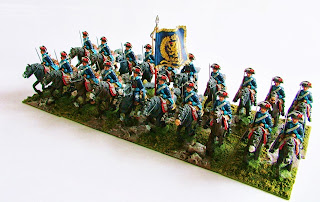 Figures are John Ray sculpts, on Connoisseur mounts. This is a fictional Pils-Holstein cavalry regiment… in fact, the Pils-Holstein army being relatively small, this will be their only heavy cavalry regiment.
The flag is hand-painted on metal foil (as will be all of my unit flags for this collection). It shows the date the original regiment was raised, 1664, and the unit emblem, a Griffin. Talking of which..

I have a few more cavalry done, some for French service some for Pils-Holstein (in total over 80 figures, some of which have been seen before), and I’ll post more pictures up in the coming weeks.

And so, to the infantry…
With sufficient cavalry to tide me over for quite some time, courtesy of John Ray’s amazing figures that I am so lucky to have in the collection, it was time to get the infantry mould done, and off to Griffin Castings I went, having booked time to chat with Stewart who is known to a number of you, worldwide.

How fortunate for me to discover that...
...they are practically on my doorstep, being just a few miles away.
Fitting in with a couple of business meetings I happened to have lined up in the diary nearby yesterday, the timing was therefore perfect.

It was great to meet Stewart and one or two of his team, and get a welcome cuppa whilst chatting about figures, casting, and indeed many other things - such as Stewart’s own hobbies too. No, he is not a wargamer, figure collector, or anything to do with our hobby… but it’s nice to know that he has an interest/ obsession himself that allows him to appreciate what we do. I’ll leave it to Stewart to let his particular cat out of the bag to those who deal with him!

I am utterly reassured
by the Griffin approach, and for any of you who get your figures cast by the company I can assure you of their professionalism and quality – Jim Purky (Fife n Drum), Frank Hammond (Minden), and many others I believe. But then you knew that already, I’m sure.

Anyway, I recorded the visit with a picture just for posterity… 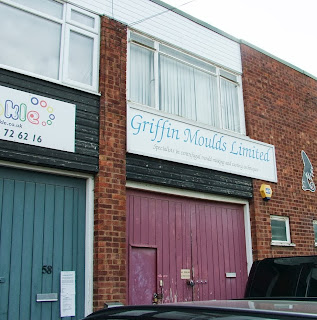 In just a couple of weeks, the mould will have been spun, quite a few times, and I'll have a nice shiny horde of metal to work on! Can't wait...