Here is the table set up for tomorrow's game: 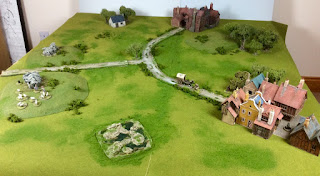 It is based on the Dominant Hill scenario by Charles S Grant, slightly adapted. 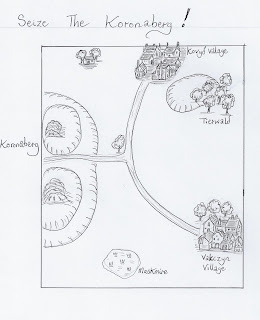 The villages of Kovyd and Vakczsyn are approximately 2km apart by road (you might say, socially distanced). They are overlooked by The Koronaberg, a large 'saddle' style mountain whose twin peaks are crowned by rock formations giving it its ancient name.

The curved road between the two villages has a junction with the road leading across the Koronaberg saddle... a vital strategic point in these parts.

Both Vaubarian and Astrovian forces have been ordered to secure this vital junction and The Koronaberg itself.

Vaubarian forces have arrived in the village of Vakczyn as follows:

Meanwhile, a similarly sized force of Astrovians is reported to have garrisoned the village of Kovyd to the north as follows:

Both armies have several other units operating in the region, and reinforcements will arrive randomly from turn three (apparently hastening to the sound of the guns)... each side has 2 further infantry battalions and 2 cavalry regiments in the vicinity. Where they will arrive, and at exactly which point on the table edge, will be determined via dice rolls.

The scene is set, and tomorrow the action will unfold...