Thanks to all who commented on the previous post... the stock-taking continues apace, and yesterday the cabinets got a real reshuffle. Amongst other things, this involved me moving the Classic collection from one cabinet to another... a major undertaking since they are all single based!

Meanwhile... In a short interval in the regular painting schedule (rank and file units), I decided to add some artillery crewmen for the gun emplacements that I use for a few periods. I painted these Forge World emplacements several years ago, and they have appeared on many a table. But I needed some crew for them for the WVS project.

I decided to paint some generic crewmen who could be for either side, depending on the scenario. In my head they are Mundanians -part of the local defence forces of the region of Mundania, so their allegiance could be for whichever side is protecting the region against enemy incursion... sometimes that's Vaubaria, sometimes it's Astrovia.

So, a generic grey coat, a few bits of detail, and done... simple. 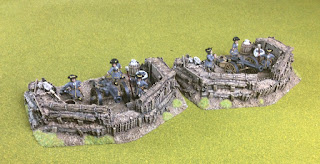 This is also the first time I have used a GW 'Nuln oil' wash (and I rather liked it). I feel that everyone else has probably been using this technique for ever and a day but that somehow it had passed me by. Late to the party as always!

Finally, while I remember it, I should add my voice to the considerable chorus of praise and thanks to Alec and Angela at Front Rank who announced recently that they will be selling the business and retiring. Over the years I have bought and painted many of their figures. They are always fantastic to deal with, and speedy in delivery. Their contribution to my hobby, and that of so many people, has been invaluable. I wish them all the joy their retirement so richly deserves.

Hope everyone is having a good Bank Holiday weekend!