Well, it's been a little while, but all is well 'chez moi.'

Last weekend, I set up an action with the WVS forces so far... Astrovians are to the left, Vaubarians to the right. 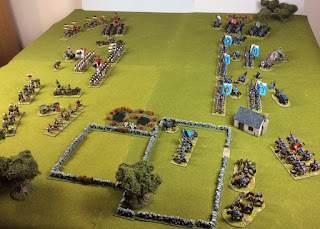 It's starting to build up now... But it looks like the Astrovians could do with some reinforcements!

Amongst Easter, the bank holidays, and the other intrusions on our hobby (!!), I have been painting a fair bit, and also enjoying the updates of' 'The Wargaming Blogerati' (you know who you are). There's some interesting stuff out there.

Similarly, there's a group of young lads doing Youtube battle reports, painting sessions, and podcasts which are rather a good way of spending an hour or two whilst at the painting desk. Check out people like '7 Son' on Youtube. OK, it might not all be to everyone's taste, but I admire their enthusiasm, productivity, and range of projects. The fact is, they're doing it. And enjoying it. And willing to share it. Well done lads.

I've also been doing a bit of project stock-taking. Well, you know how it is when you are thinking of starting something fresh and wondering how the heck it's going to fit in with all the other stuff!!

I'm keeping myself 'sane' (it's all relative) by wondering which of the various parcels from manufacturers such as The Perrys and Front Rank will arrive first. It's the modern 'lockdown' equivalent of cockroach racing...
This morning did involve a little unboxing over breakfast too, although that was just a few additions to an old project, so doesn't really count!!

More to show this weekend, I hope.